Starlink ups the ante on satellite connectivity at sea.

No discussion about the future of yacht internet is complete without addressing the increasingly critical need for reliable, high-speed broadband service at sea. As technology evolves and the virtual world grows ever more inextricable from the functions of modern life, constant internet access is quickly becoming more than a luxury or even an expectation - eventually, it will be a nonnegotiable necessity for owners, guests, and crew alike. How do we get there from here? How do we unlock that potential? Could Starlink hold the key? 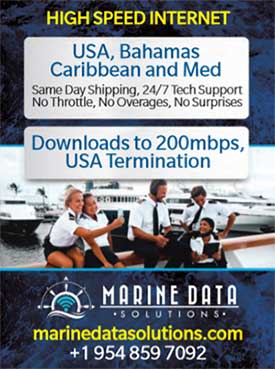 As with all things Elon Musk-related, Starlink has been garnering quite a bit of press attention. A division of Musk's aeronautical company SpaceX, Starlink is also the name of its rapidly expanding constellation of low Earth orbit satellites (LEOs) intended to eventually blanket the planet with high-speed internet access. On Jan. 6, SpaceX sent 49 of the small, mass-produced LEOs into orbit, bringing the total to almost 2,000 satellites launched, with thousands more to come.

While its current top speeds of 150-200Mbps are nowhere near the gigabit speeds of fiber-optic cable, it's quite fast compared with other satellite internet providers, which use satellites in geosynchronous orbits of about 35,000 km.

Starlink satellites operate at altitudes between 550-1200 km, according to an FCC report, and it's this low-orbit approach, with less distance for signals to travel, that allows for less latency (lag time in responsive connectivity). Low latency is critical for voice and video calling, gaming, and live content streaming. For those who live in remote areas where internet access has been dial-up slow and unreliable, or completely unavailable, it's a game changer.

But that's the land-based system. Could Starlink also be a game changer for service at sea? Musk has declared on Twitter that maritime application would be ((relatively easy,'' and that it should work everywhere for global maritime by roughly the middle of this year, once there are enough satellites with laser links launched. SpaceX began adding laser links to satellites planned for polar orbit early in 2021, but now all satellites launched have been upgraded with the links, according to the company. These ((space laser" links are key. They allow a satellite picking up a signal from a boat far from shore to bounce that signal off other satellites until it reaches a satellite within sight of a land-based ground station, where the signal is then connected to the wider internet. According to Starlink, information travels much faster through "the vacuum of space" than even fiber-optic cable. ((Laser links in orbit can reduce long-distance latency by as much as 50%, due to higher speed of light in vacuum & shorter path than undersea fiber," Musk tweeted. 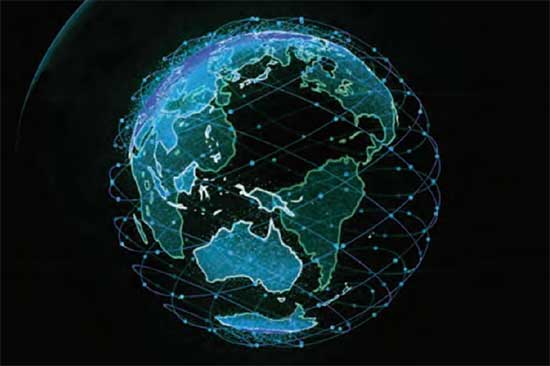 Still, there are hurdles that remain to be crossed. One is licensure and regulatory approval. Starlink is currently licensed only for beta testing on 10 ships, two of which are the autonomous spaceport drone ships that SpaceX uses to land its returning Falcon 9 rocket boosters. Some approval has already been granted by the International Telecommunication Union, the United Nations agency that coordinates global communication technologies and satellite systems. But with Amazon's Kuiper, OneWeb, Telesat, HughesNet, 036 mPOWER, and current satellite communication giants Inmarsat, Iridium and Viasat all elbowing for a piece of the pie, regulatory issues have arisen, as well as concerns about growing amounts of "space junk" threatening the visibility of the night sky and raising the odds of collisions in an already jammed orbital environment. It is estimated that the U.S. Space Surveillance Network is currently tracking about 15,000 pieces of space junk, down to as little as 4 inches in size. During July and October of 2021, the Chinese Space Agency informed the United Nations that their Tianhe manned space station had to maneuver to avoid collision with a Starlink satellite.

THE PROPOSED MERGER BETWEEN VIASAT AND INMARSAT PRESENTS AN INTERESTING TWIST

SpaceX has attempted to address those concerns with upgrades designed to reduce the satellites' brightness during operation, and technology that enables them to autonomously avoid collisions based on uplinked tracking data. The satellites also have been equipped with krypton-fueled thrusters that allow them to leave orbit at the end of their life and disintegrate upon entering the Earth's atmosphere. In documentation to the FCC, SpaceX stated that their lower orbits will help ensure the satellites re-enter the atmosphere in a shorter time in case of failure, and their closeness to Earth allows the fleet to broadcast signals at reduced power levels that are compliant with limits intended to reduce radio interference with other satellite and terrestrial wireless networks.

Another variable that will have to be addressed is antenna technology. Starlink operates on a flat-panel with multiple high-throughput antennas and a single solar array. Those flat- panel terminals (versus the traditional parabolic dish) need to be stabilized on a moving ship. According to SpaceX's latest FCC application to deploy ESIMs (Earth Station in Motion) in U.S. and international waters, these specialized, high-performance units have been "ruggedized" for harsher environments and are able to continue to operate at greater extremes of temperature and weather. Only sea trials will tell if they have been "ruggedized" enough.

And then there's cost. According to a filing with the ITU, Starlink is ultimately planning to launch about 42,000 LEO satellites to provide worldwide internet coverage, while the absolute minimum required to make the system fully operational has been estimated at 4,425. Beyond the astronomical costs of launching all those satellites into orbit, the mass-produced Starlink LEOs have a life expectancy of just five years, which means replacements will have to be continually launched into orbit by the thousands. Additionally, not all of them are functional. Some fail and others are intentionally de-orbited, either because of technical problems or because they are being replaced with newer, updated versions. Astrophysicist Jonathan McDowell, of the Harvard­Smithsonian Center for Astrophysics, recently estimated that, of the more than 1,900 Starlink satellites that have been launched to date, there are 1,468 currently providing service. Martin Kits van Heyningen, CEO of satcom service provider KVH, said LEOs are the most expensive way to deliver satellite connectivity. "It's not a lower cost solution, it's a lower latency solution." Of course, KVH is watching closely and preparing. "We're already developing LEO-ready maritime satcom antenna equipment.”

According to Paul Comyns, senior director of channel sales at Intellian Technologies, it will be three to five years before the satellite constellation fills out. "It will, however, change the architecture of the industry as it opens up IoT [the Internet of Things that allows inter-connected devices to collect and share data without human intervention] and delivers connectivity at extreme latitudes," he said. That change can't come soon enough for yacht crew.

"Owner and guest expectations are high," Dave Johnson, a retired superyacht captain, said of reliable broadband aboard luxury cruisers. "Costs of monthly service, as well as download speeds, are the issue. More creative programs, as well as 24- hour support, are always appreciated."

While cost and availability of that support (especially to captains) are yet to be determined, it's the timeline that is the big question. Despite Musk's ambitious predictions, skeptics say Starlink seems to be years away from fielding enough satellites for service at sea. Also, the recent announcement of the proposed merger between Viasat and Inmarsat presents an interesting twist, since Viasat is marketing speeds that rival Starlink, while Inmarsat is working toward complete global coverage. That merger, if approved, is expected to take place by mid-2022.

BY SUSAN JOBE
Corey Ranslem and Zuzana Prochazka contributed to this report.